Our paper, entitled Self-organising Zooms for Decentralised Redundancy Management in Visual Sensor Networks by Lukas Esterle, Bernhard Rinner and Peter R. Lewis, has been accepted for publication as full paper at this years International Conference on Self-adatpive and Self-organising Systems (SASO).

The conference will be in Boston this year and I am looking forward to present our work there!

The best things come in threes… 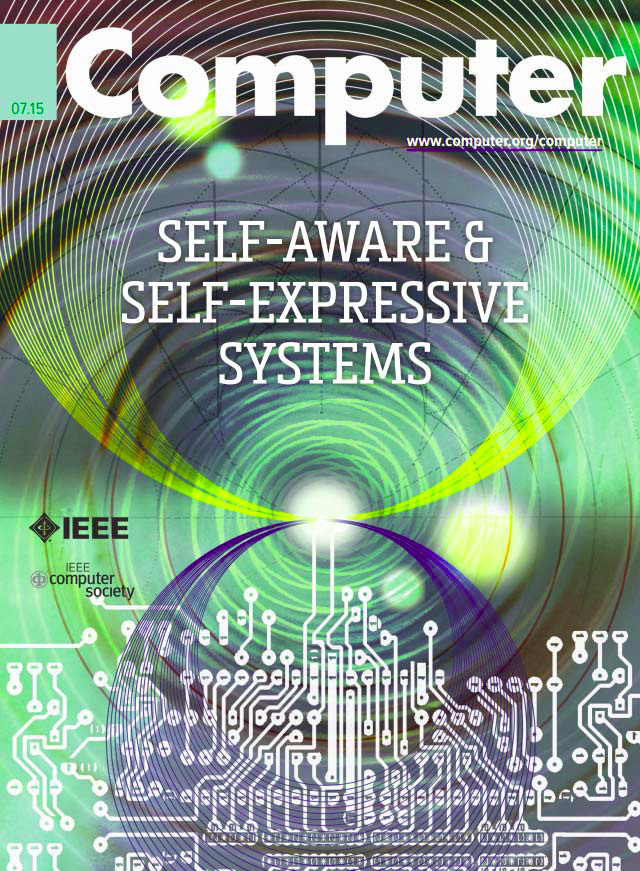 Yesterday evening we received the acceptance notification from the guest-editors for an upcoming special issue on Self-aware & Self-expressive Computing Systems for the IEEE Computer Magazine. The paper entitled Self-aware and Self-expressive Camera Networks. The special issue by the guest editors Jim Tørresen (University of Oslo), Christain Plessl (University of Paderborn), and Xin Yao (The University of Birmingham) is expected to be published in July 2015.

Last Tuesday was quite a good day for getting papers accepted.

After a very long endeavor we finally received the acceptance notification for our submission to the special issue called ‘SASO 2013: Selected, Revised and Extended Best Papers’ in the ACM Transactions on Autonomous and Adaptive Systems.  The paper is called Static, Dynamic and Adaptive Heterogeneity in Distributed Smart Camera Networks. The guest editors of this special issue are Jeremy Pitt from the Imperial College, London in the UK and Tom Holvoet from the University of Leuven (KU Leuven) in Belgium.

A few weeks ago I participated in the Dagstuhl Seminar (http://www.dagstuhl.de/15041) on ‘Model-driven Algorithms and Architectures for Self-Aware Computing Systems’.
Highly inspired I return to my office, looking forward to new interesting collaborations with people from all over the globe.

The European FP7 FET-PROACTIVE project EPiCS (Engineering Proprioception in Computing Systems), which I was working on the last four years, has been successfully completed with the final review on October 14th. After receiving excellent ratings in the last three years, we are eagerly awaiting our fourth year rating.
In collaboration with the University of Paderborn (coordinator), University of Birmingham, Imperial College, University of Oslo, ETH Zurich, Airbus and AIT we worked towards novel approaches in self-awareness and self-expression.

For a node to be Self-aware requires it to monitor its internal state and process this information locally. Additionally, each node in a larger system has to have knowledge about its immediate environment to determine how it is perceived by other parts of the system. Optionally it possesses knowledge about its role and the corresponding importance of this role; likely effects of potential future actions / decisions; and historical knowledge previous actions and events.
Self-expression on the other hand is based on the nodes self-awareness and allows it to assert its behaviour upon itself or other nodes. (Peter Lewis et al. A Survey of Self-Awareness and Its Application in Computing Systems. SASO 2011)

Our demo has been accepted at the ACM/IEEE Internation Conference on Distributed Smart Cameras.

The paper entitled Demonstrating Autonomous Handover in Heterogeneous Multi-camera Systems will be published in the official conference proceedings.

Yesterday, I defended my PhD thesis with distinction!
The committee was composed by Laszlo Böszörmenyi, Bernhard Rinner (Supervisor) and Janusz Konrad (Boston University).

Abstract:
Modern smart cameras combine processing units with visual sensors and allow to acquire and process video feeds on the device. Visually tracking objects in a network of cameras can be achieved in a distributed fashion where only a single camera is responsible for tracking an object. This requires the network to decide autonomously which camera is responsible for tracking an object at what time. Without having any knowledge about the location or orientation of other cameras nor the movement patterns of the objects of interest, using market-based techniques the cameras are able to ‘trade’ tracking responsibilities. Getting to know its trading partners, each camera is further induced with the capability of learning its local neighbourhood, the so called vision graph. This allows each camera in the system to reduce its own communication overhead, and hence the communication effort of the entire system. Making use of biology inspired foraging mechanisms, artificial pheromones are facilitated to build up the vision graph and simultaneously enable the cameras to forget about neighbours where the response rate to advertised auctions drained over time.
To advertise auctions within the network of smart cameras to prospective buyers, the cameras can employ one out of six different strategies which are able to exploit the vision graph. Each of these strategies gives rise to one out of two objectives: minimising network-wide communication or maximising system-wide tracking performance. So-called multi-armed bandit problem solvers are facilitated to enable each camera to identify the strategy fitting best for its given situation and hence improve the overall performance of the network.

If you are interested in my thesis, you can find it in the publication section

Additionally, I would like to thank Peter R. Lewis from the Aston University in Birmingham, Prof. Xin Yao from the University of Birmingham, Arjun Chandra from the University of Oslo, Roman Pflugfelder, Georg Nebehay and Gustavo Fernandez from the Austrian Institute of Technology, and my colleagues Bernhard Dieber, Jennifer Simonjan, Thomas Winkler, Daniel Wischounig-Strucl, Melanie Schranz, Herwig Guggi, Saeed Yahyanejad for their close collaborations and support in the last few years! Thank you!

I’m co-chairing the Resources AWare Sensor and surveillance NETworkS (RAWSNETS) workshop at the the International Conference on Distributed Smart Cameras 2014 (ICDSC2014) in Venice, Italy this year.

As sensor networks have an increasing number of nodes with ever smaller hardware and lesser resources available, such network are required to monitor and process data based on their available resources. The workshop focuses on original research in the area of resource aware sensors.

The official website of the workshop can be found here.

I’m currently supervising two highschool students (HTL) during their thesis. They work on identifying spelled letters using sign language with the LeapMotion system. Their idea is to enable speech impared people to use devices and services, which currently only support voice control, using sign language.

Their impressive work resulted in a system called TalkTalk. TalkTalk has already drawn attention at various contests and challenges:

1. First place at the Build! innovation contest in the category students. They were awarded 1000€.
2. Won the Semi-final and are nominated for the final decision in the Jugend Innovativ Contest. The final will be end of May 2014. They were already awarded 150€.
3. Selected for presentation and nominated for the final at the innovation@school contest. The final will be May 28th.
4. Submitted to the U19 contest of the Prix Ars Electronica.

I wish them all the best for their future endeavours!

Our article entlitled “Static, Dynamic and Adaptive Heterogeneity in Socio-Economic Distributed Smart Camera Networks” has been accepted for publication in the ACM Transactions on Autonomous and Adaptive Systems.